Aerobatics for the upcoming Summer - why, how and when. 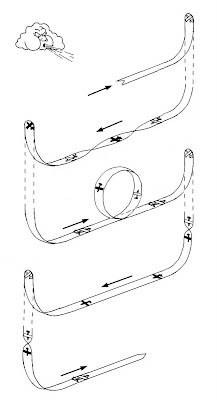 My two favourite reads at the moments are the Berg Blog and Kev Farr’s slope column in the excellent Southeaster mag. Mainly cause the accent is on fun and also because slope soaring has a habit of reinventing itself over the years. Remember that word “fun”…….

Kev may not be surprised that his mention of the difficulties of applying the existing formal slope aerobatic schedules to the common all garden slope soarers is something the DMAC have wrestled with for three decades, including the time consuming climbing for height between maneuvers and the short contest operating time envelopes between 2:00 and 5:00pm in the afternoon.

The introduction hints at why slope aerobatics has never established itself for more than short spurts. Unfortunately, do’ers like me had neither the inclination nor Kev’s much mentioned nuts to go tamper with the slope commandments. Maybe the TOSS lads are just the fresh faced mob to rewrite to something mooch more “fun” for the slope lads, bearing in mind that “serious” is really not that easily attainable in this very different branch of the aero modeling discipline.

The answer lies in the Capie’s most favourite sexy slope rhythm, the all too common half-pipe. The solution being, stick in some varied simple tricks in through the bottom of the swoop and a continuous slope aerobatic sequence thus achieved for shorts periods of time.

The upside is that the entire sequence can be achieved within a minute and, more importantly, pretty much the whole mob from the particular class can soar and play at height, awaiting their turn and alleviating boredom. All the introduction negatives addressed in one foul swoop (to coin a phrase ;-), including involving the modern popular flying wing foamies as another class.

Some practice by Brad Conlon on the popular Toko, along with myself on a V Tail non rudder Chapter 2 plus a tatty 36 inch foamie, proved the sequence is easily attainable with a bit of practice by pretty much the cross section of popular slope craft (but also very easy to look stunning or funny bad….. ;-).

The three tricks are scored out of ten and the all too often iffy stall turns / wingovers incorporated only as part of the overall presentation, thus very little impact on the scoring. It is hard to describe without lots of hand signals and the written explanation is damn confusing to the un-initiated so thankfully, John Lightfoot’s ribbon drawing skills have come to the rescue - just click on the drawing for full size.

Get the (slope ;-) Tossers out to give the starter pattern above a go on an informal level. It is deceptively tricky, great fun but practical for any slope soarer than can fly inverted (we even allowed those inverted challenged pilots to swop out for another trick with a 1 point sacrifice).

Then slowly expand the envelope to encompass degrees of difficulty, without getting carried away, and get some brave soul to write us a new practical pattern sequence and we might just see a return to slope aerobatic comps, based on fun and lotsa flying….. ;-)
EXPLANATION OF RIBBON SEQUENCE
Half pipes are a continual series of huge U shaped swoops left to right and back, the U facing the judges and audience, topped each end with a stall turn toward the wind – often used to build speed, energy and height.

By way of inspiration, this little reminder from Scotland, the joy of sloping.....
Posted by davedurbs at 9:58 AM 3 comments: 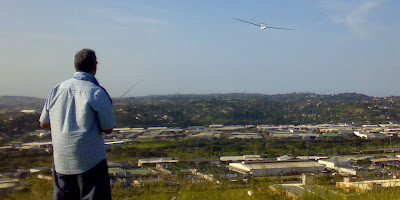 Caught on cell by luck more than good judgement - Russ with the 4m Ash on a straffing run. Sunday light but pleasant for listening to the passes. Jonathan, Lynn, Dave and Diggers (s/j) also in attendance. 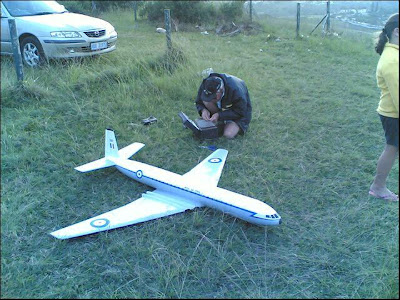 Mid week with Pete Milne and the new PSS Comet - in his mid eighties and still building these beauties.
Posted by davedurbs at 12:17 PM No comments: