Springfield Chickens out and about part 2 - U control line at Ashley sports field (Pinetown). 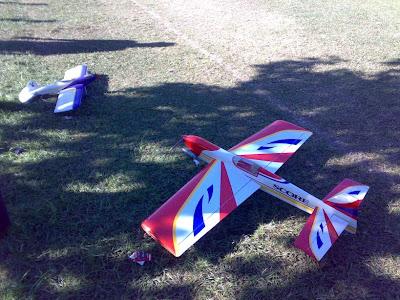 Russ Contradt's wow (very) looking new Score ARF, flew magic until a bellcrank pushrod forced an inverted landing, fortunately only a wrinkled cowl and bumped the fin off - nothing serious and looking forward to next time. 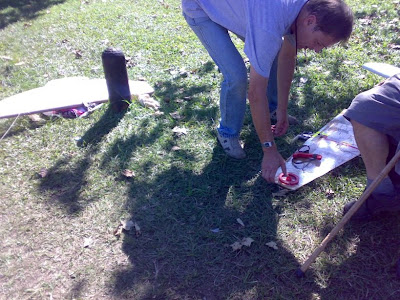 Conrad from Cape Town readies the combat craft, shown in the hectic video at the bottom. Conrad and Dirk headed for the world champs in France in June. 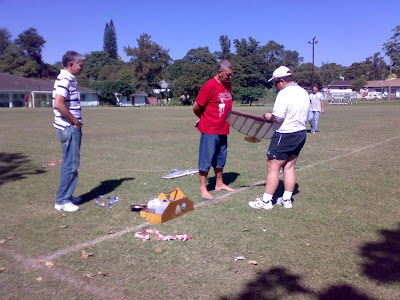 Dirk flashing up the combat with assistance from Russ and interest from Glen. 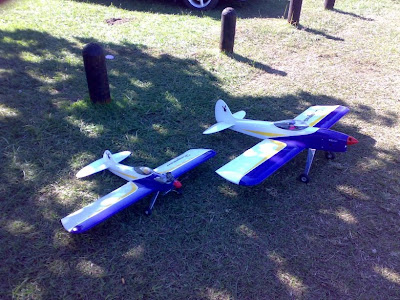 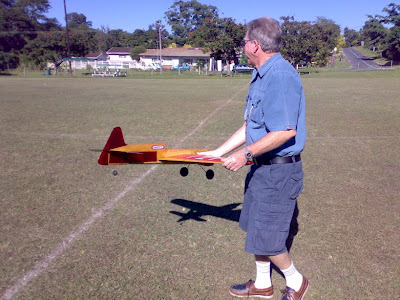 Doug with Pete's 1969 craft, the old toppies creeping out from the wookwork with loud planes, from all over ;-) 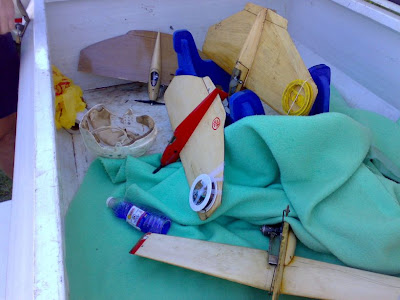 Some of the high speed team racer stuff that Dirk and Conrad pay with. 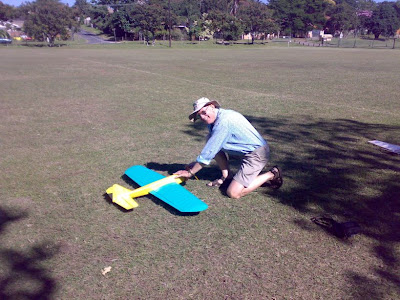 Dennis posing for the overseas family with his oldie - also very loud! 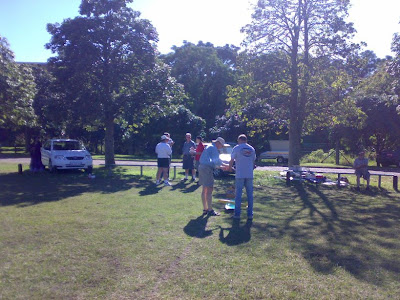 An ideal venue for CL, with nice shady spectator seating. A bunch of interested folk were in attendance, including old timer Dave Hooker and that man Nev Tangye from Model world. A very keen lightie and his Mum stayed on and were asking Doug a bunch of questions, nice to see. A new small RC helicopter man around the corner at Ashley centre, along with the Highway Wail reporter were in attendance as well.

For broad banders only, not a great cell movie but man does it show the frantic action with a streamer cut followed by a tail chomp, along with oos and aahs. Dirk and Conrad were really fired and anyone a bit jaded with slope speed should try this for a buzz. Repeat attendance at this magic venue is iffy but the CL lads are going persist with the second Saturday morning of each month, at various venues. [This a MP4 movie and Russ has alerted that it is thus not viewable by all - a quick Google shows some useful places to download off the net].

Posted by davedurbs at 10:01 AM No comments: 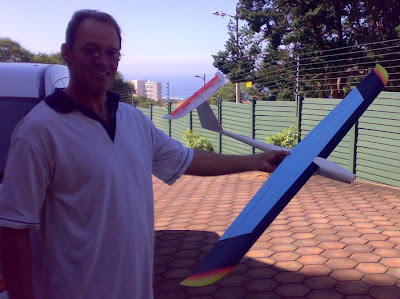 A frantic search for a out of production Graupner Secco yielded a broken wing from Luke and a fuse from another source. Kobus Visage has done a stunning job of repairing and respraying the wing, the cell pic does it no justice - well done, boet! It was also a chance to survey some of the composite beasties he has been developing in his garage. 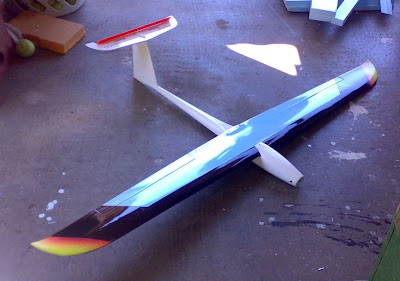 Posted by davedurbs at 9:53 AM No comments: 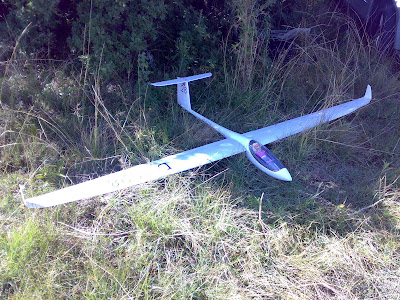 As Russ will attest, Mrs Greer's oldest was "reeelly reeelly" chuffed with the maiden flight of the CMP ASW28 with foam veeneer wings at the Volksrust Sungazer scale glider event. more of a blow by blow report on the Barbie glider will surface in due course.

Of greater importance are the links below to the excellent Berg Blog reports:

Posted by davedurbs at 9:40 AM No comments:

This year the Natal Thermal Soaring Championships were held at Summerveld on 29/30 March. Despite the fact that there were very few entries, the overall standard of flying was very good.

On Saturday morning competitors and officials assembled in the parking lot for a pilots briefing. Because of the heavy cloud cover it was feared that the competition might be interrupted by rain. Once the horses departed we set out the winches and assembled our planes.

Rose Wittstock handled the duties of CD and capturing of flight details. Dave Greer kindly provided the laptop and relevant programs to calculate the results which were then entered onto the computer by Des Cooper and Rose. The power supply for the computer was provided by Fred Wittstock.

Despite the heavy cloud cover many competitors reached the target times for the class in question and 44% of all landings in the open class finished within 2m of the spot. During the second round it started to rain gently and a vote was taken to decide whether to continue flying. The majority decided that we should press on, which proved to be the right decision as the weather improved after about an hour and we did not loose any flying time. We did however blow a fuse in the power supply which prevented Des from capturing all the flight times on the computer.

On Sunday there was less cloud than on day 1 and the wind had shifted towards the north-east. The wind was a little stronger than on day 1 and the lift was more difficult to find and follow. As a result some slots were won by times that fell far short of the target times, and re-launches were fairly common.

A feature of the event was the wonderful spirit of camaraderie amongst the competitors. Hardly a cross word was spoken or voice raised in anger. There was of course the normal healthy banter which helped to make things interesting and relieve the stress. After the final flight of the day the scores were calculated and audited in record time thanks to the efficiency of Dave and his helpers. Thereafter the trophies and prizes were distributed and everyone went their respective ways, tired, but happy.

At this point I would like to thank all of the competitors for their participation and all helpers for their patience and dedication in some rather testing conditions at times. A special thanks also to Eddie (of the beard), who came to watch and ended up retrieving many ‘chutes. Thanks to NWJ for sponsoring prizes for first place. Finally, I must congratulate the winners of the various events. In the end their consistency and skill paid dividends.

The results, after seven rounds and one throw away, are after the pics: 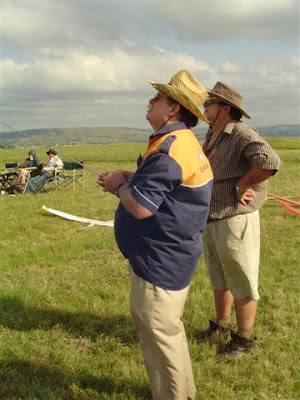 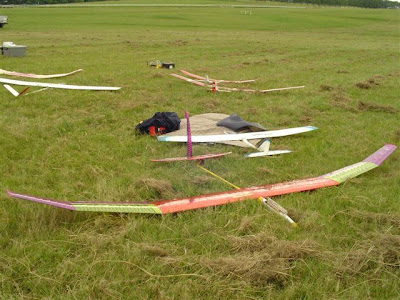 The menacing Troodon designed, built and flown by Simon Nelson. 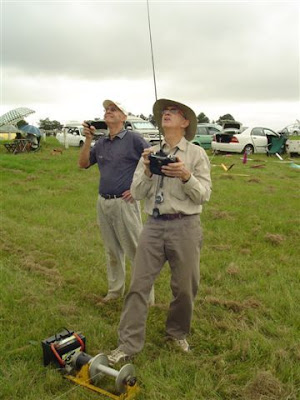 The evergreen Dennis Bird launching with Don Slatter ready to start timing when the plane detatches from the winch line. 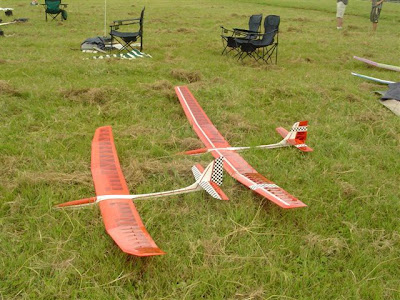 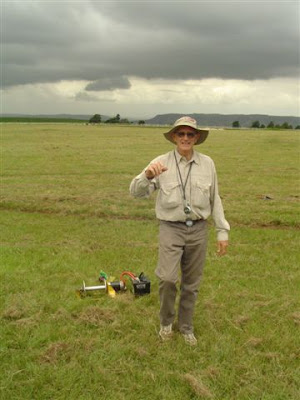 DMAC's cheerful contest organiser, Dennis Bird. The cloud in the background was dark but relatively high and no problems were experienced. 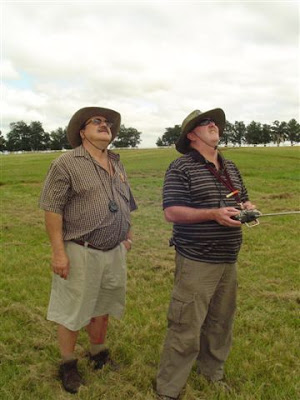 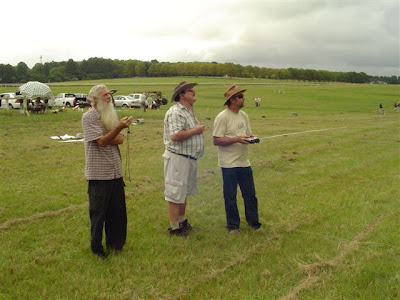 Third place Paul Boswarva in full cry with the Supra, whilst Fred Wittstock calls and Eddie the Biker man (who has won countless longest beard awards at biker rallies) gets involved and was tireless in helping with chute fetching. 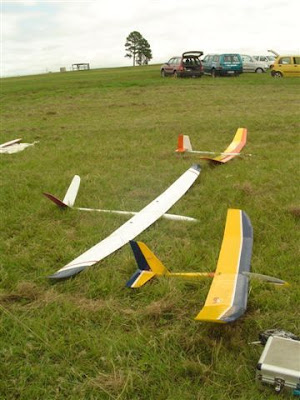 The Natal Champion's winning Graphite along with his RES successful Dave Denley Algebra and the Spirit 2M, which was hot on the heels of the hard launching Graphite 2 Metres. 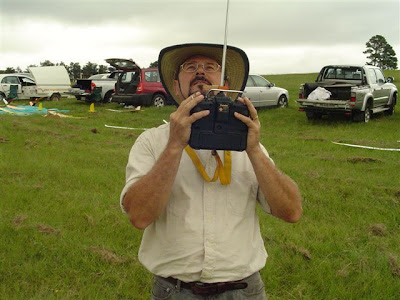 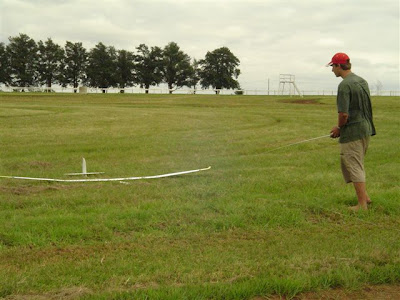 Fifth place Will Cranmer with the popular Xperience Pro - faultless on landings. 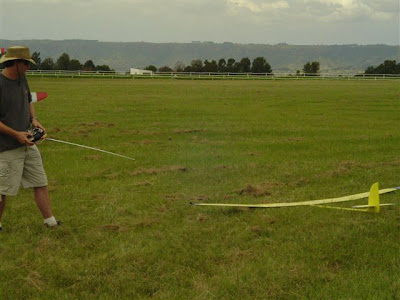 Second place (by a short head) finisher Brad with the Xperience Pro. Was untouchable on the Saturday but found the going tougher on the Sunday. 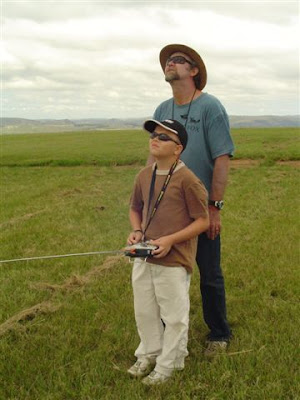