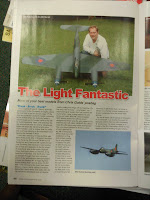 An American friend of mine sent me this page from "Quiet & Electric Flight" Magazine.... I got a bit of a shock! Finding myself in the famous RC magazine. Anyway - pretty cool, just sad that this aerie is in the big aerie graveyard in the sky...

Posted by Bill Williams at 6:10 AM No comments:

2. 71.92% Russ Conradt (Shongiloma)
3. 71.68% Christo le Roux (Aldij)
4. 71.45% Dave Greer (Minivec)
5. 69.17% Kev Farr (Vector 3)
6. 64.56% Jeff Steffen (Aldij)
7. 61.95% Simon Nelson (OD Weaver)
8. 57.11% Ryan Nelson (OD Weaver)
Second to fourth separated by less than 0.5%!
4 ZAGI BY 4 LAP RACING:
1. Michel Leusch (Jeff Steffen's Zagi)
2. Luke Johnstone
The competitor count is a reflection of the hard core folk who hung in to the bitter end on Sunday, rather than the surprisingly large number of folk who attended over the three days (14 initial contest entries). Friday was bliss SW practice time at Inanda, Saturday wind strong but lift light and Sunday at Switchblade downright Berg wind challenging! Simon's bright idea of the Zagi x 4 racing generated a dozen or so racers who had a blast, a useful idea for keeping things ticking along during "non aerobatic" air.
Reports and lotsa pics will follow on the Toss and this blog, keep a watch out. Special mention must be made of Russ's huge time, money and stress input to the event (not to forget Mandy and Kelly Conradt's magic hospitality), along with Dennis Bird for CD support for Sunday - as well as Luke and Dean for judging. Ever cheerful Adi Critten and Rudi Smook made it all that bit more special. Our appreciation to Tosser's Jeff Steffen, Christo le Roux and Kev Farr for flying up from the Cape for the three days - they have promised a bigger mob for next year, to wrest the trophy back from the Sharkies!
Pics taster:
The Saturday folk play. 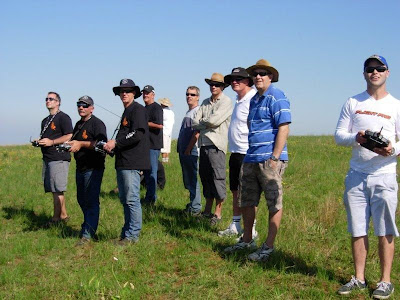 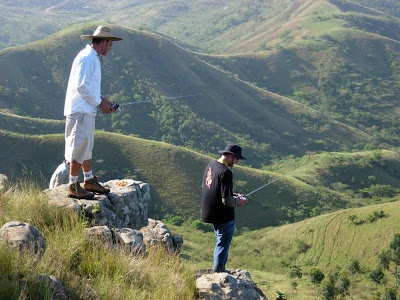 Some of the Saturday cars.

Russ Conradt made it happen! 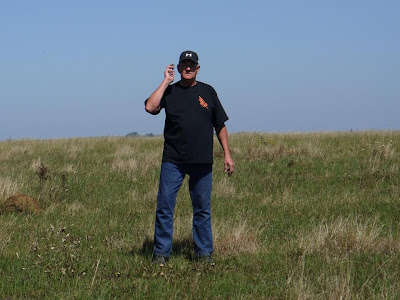 Kev Farr and the yellow Zagi. 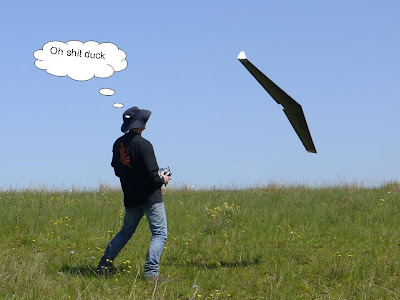 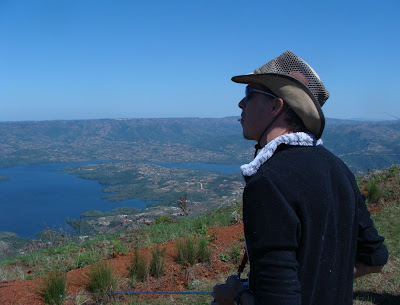 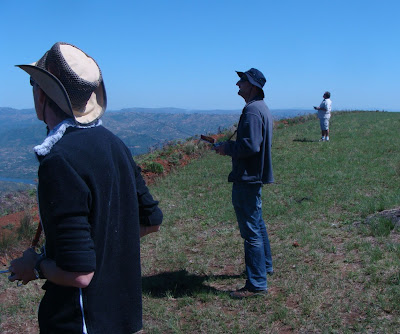 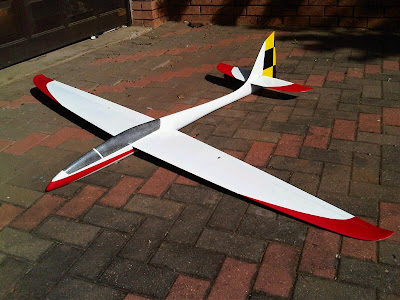 Some of the mob playing on the Berg wind NW side of Switchblade. 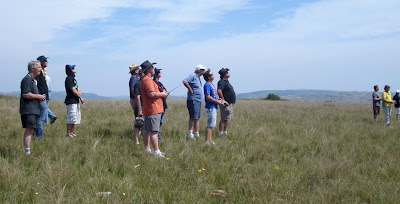 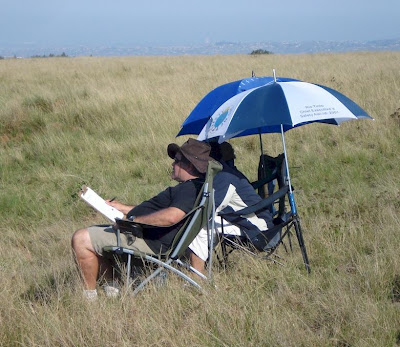 The folk who stuck it out to the very end, late Sunday at Switchblade. 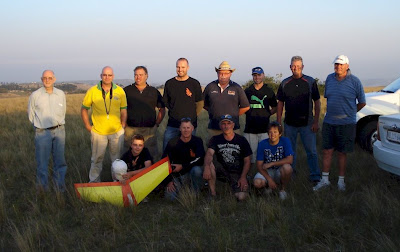 The magic trophy, which the North is not going to easily relinquish! 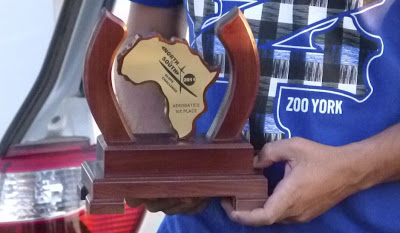 Posted by davedurbs at 2:59 PM No comments: 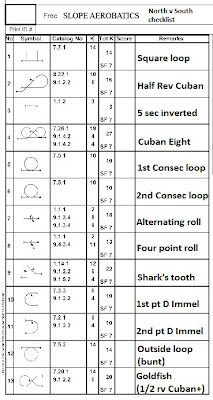 Here is the crib schedule of manoeuvres off the scoring program for the aerobatics part of the slope challenge weekend. A nice range of "non scary-complex" manoeuvres suited to Kzn slope conditions.
Start times are never cast in stone for slope events but Russ's Saturday intention is to meet at the Sasol at 9am for a 10am arrival at the slope. This may vary so please keep in touch with Russ on 0828227887.
For those not used to the route, meet with the convoy at the Sasol garage at the Kwamashu turnoff from the N2/North Coast intersection or follow these excellent Google directions, courtesy of Johan Moelich:
Map with directions
Map with intersection mini maps
Map with intersection photographs
Johan's original Google link
Posted by davedurbs at 3:32 PM No comments: 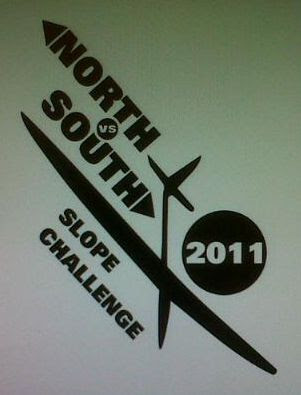 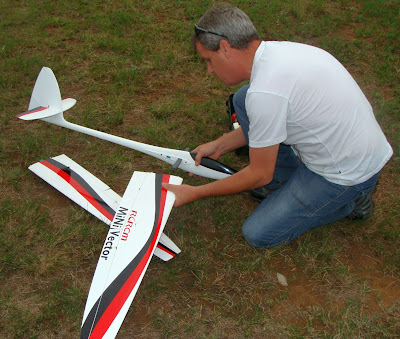 The local lads are looking forward to Russ's next week (17/18 September) slope aerobatic challenge against the three Two Oceans Slope Soaring (TOSS) lads coming up from the Cape. A recent brief window of opportunity saw a couple Minivec slope aircraft arrive in Durban and the race now on to have these ready for the event. Mark got to experience the maiden flight in excellent slope conditions at Ziggy-nanda this afternoon. This amazing aircraft was not only a dream to assemble but also completely blew us away on its maiden flight. A vice-less pussycat for relative novice Mark but on rails for aerobatic work, with an energy retention that was stunning..... Mark was quickly trying things he had never experimented with on the slope before. He had followed the instructions implicitly and there was not a single peep of trim needed to any single control surface! Everything else we own slope wise is now instantly redundant - kudos to James the Hambone for the stunning design and the China factory for building it so right. 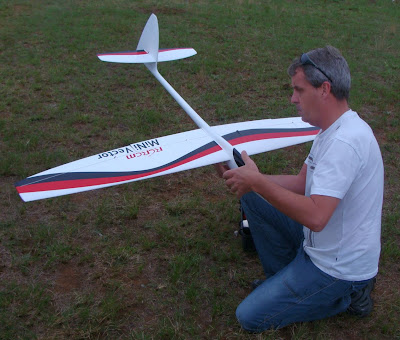 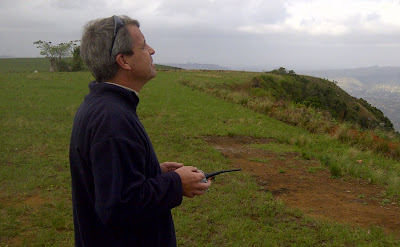 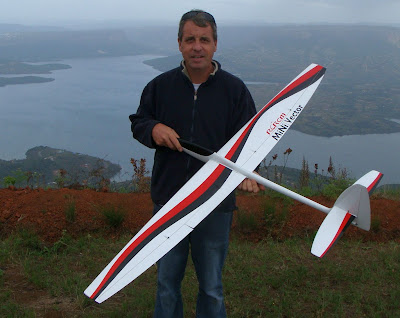 Yours truly has always been negative about slope aircraft with fully symmetrical sections ever working on the Kzn slopes, well that theory was well and truly proved dead wrong, the effortless way that the craft cuts through the air shows just how clean and accurate is the only way forward, remarkable.....
Posted by davedurbs at 5:20 PM No comments:

A visit to Umhlanga club for e flight 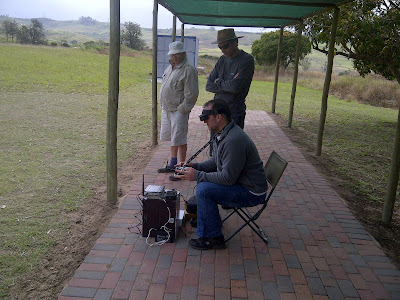 Activity at the college had Johan and Dave pay a visit to the Umlanga club field near Hazelmere dam, instead, where a pleasant morning's flying was had with George and Stan, which were quite taken with Johan's quad copter now being flown remotely from the onboard camera by Johan through the glasses. The picture from the teeny camera was remarkable and Johan's confidence grew with each flight. Also impressive for us was Stan's large scale Pilatus that flew immaculately and had such presence in the sky, it could be mistaken for the real thing! Complete with retractable undercarriage and flaps.
Posted by davedurbs at 5:05 PM No comments: