Learning Lesson from the Legends

It is my norm to report on the positives of an event as a form of encouragement and I was brought to earth with a bump when Christo asked me why the results were so poor. Jawellnofine, I guess it is also important to explain some of the tribulations that Russ hinted at - although more from my own personal perspective.

1. Have your equipment ready.

The parcel post let me down badly and the battery packs and spare props for Russ and I are still on the water. We chased our tails on charging all day and round one was the only one with a fully charged pack for me. Makes the wussies with kits who did not rock up look clever but we are at least over the pain of the first event. John and Pete had this aspect nailed and were enjoying much success with the 1300 cheapie packs from Hi Model, by the way.

Launched my plane for the round zero race and it was all over the place like a bucking bronco. Blamed Russ's pap lackies but only after round one did I realise that the tailplane was floating up and down, quietly tearing away from the fuselage sides because I had used my favourite wood white glue in preference those recommended by all - and also not covered the fuselage with Solarfilm as recommended by Andre Killian. Potentially lethal and rattled me so badly that I managed to launch with no ailerons at all (plugged in backwards) for round two - instant throwaway and testament to the sweet handling of the Witblitz that it survived without a scratch. I suspect John could have added a lap or two to his result if the 35 meg plane was also not coughing and spluttering at the far pylons, thanks to the cheapie esc - he is now looking at 2.4G with more interest.

The start of round three was spent re-trimming for the secured elevator and realising the Pete was right in that I still had way, way too much movement (who wrote 8mm in the destructions.....? ;-) and the already halved throw was halved again for round four where the old killer instinct started coming back about half way through the race - what a rush.

4. Read the rules and pay attention at briefing.

Yours truly spent the whole day aligning with the left hand pylon for the start, as opposed to the correct mid point, so every race was play catch up. So doff but when you're rattled......

5. Listen to your caller.

Adrian Baker was patience and calmness personified and it all came together when I started listening to him. The final Velocity dice tween Russ and I was where I started to follow Adrian's guidance implicitly, what a difference!

6. Above all - practice in a range of winds.

We routinely do our electric flying at 6:30 in the morning and are heading for breakfast when the wind arrives. The edges of Gromor drop away and there was a reasonable breeze which provided some fun turbulence - the breeze eventually switching to our backs with the result that my caller had to keep encouraging me to drift the plane back to the field!

The upshot of all this is I popped out to our local field in perfect conditions at sunset on Monday after work, to try the now secured tail, teeny pitch movements and refreshed pack. Wow, what an improvement and the plane was just so much faster and sweeter without the little pitches and glitches on elevator. I have to concur with Russ that the props also seem to have more bite at sea level and our next event down this way will likely show a marked improvement.

As a total aside, I thought it worth explaining my respect for the Pylon legends. More than a couple of decades ago, I was on holiday in Cape town and visited the power Nats being hosted there. The wind and weather was so seriously foul that I viewed the pylon racing from inside my car. The well supported pylon racing was carnage all over but there was one lone plane circulating the pylons like clockwork in all classes - no flashy moves and certainly not the fastest straight line speed. That day a certain Mr John Dorse aced the pylon Nats and I was awed.

Some years later, still way back as I was even still on mode 2, and Pete Sherliker offered me a flight on his Quickie 500 at Cato Ridge and I was blown away - like a knife through butter, this plane just flew on rails. Should have learnt the pylon trimming lesson then and got involved but at very long last I am enjoying competing against these guys. No prima dona personalities and attitudes - just help, advice, encouragement and buckets of enthusiasm.

I can only thank them and Russ for getting us on to this fascinating journey..... Pete, Gail and John with the well prepped Witblitzes.
Posted by davedurbs at 10:28 AM No comments:

More pics from the DMAC Gromor Pylon / Witblitz day 31 May 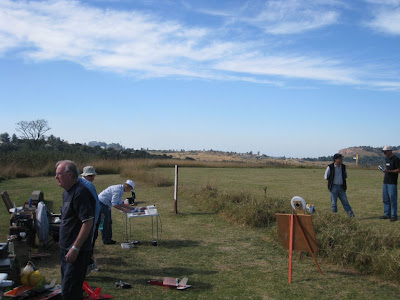 Gail setting up race control at the magic Gromor field. 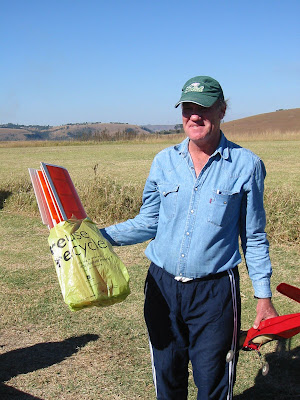 Look carefully at the packet wording - John Dorse came armed with a whole brood of his moldie Witblitzes..... ;-) 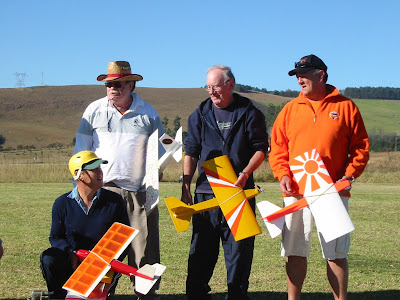 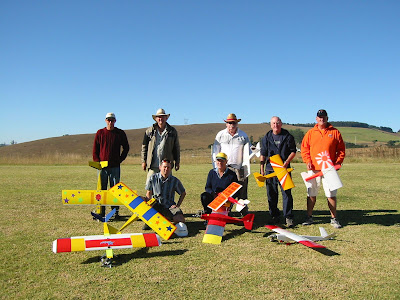 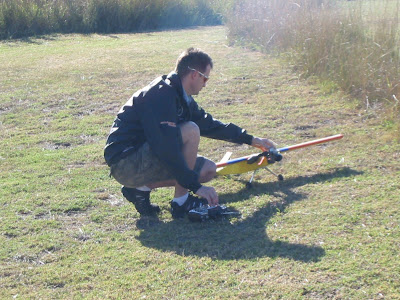 Wayne firing up his quickie - had a leery moment at pylon 1 when one half the V tail folded but kept his head, shut the motor and binned it well away from the field. 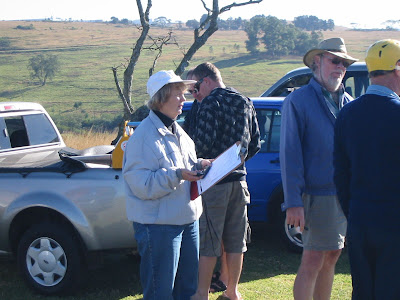 Gail Dorse ran it all in a most pleasant and enjoyable manner. 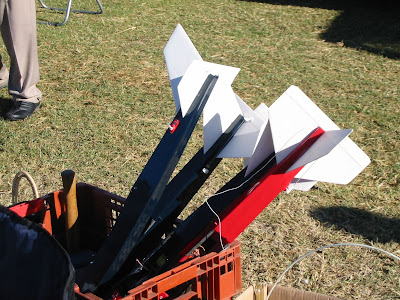 No kidding about John being armed with brood of Witblitzes, see the simple but neat glass fuselages. 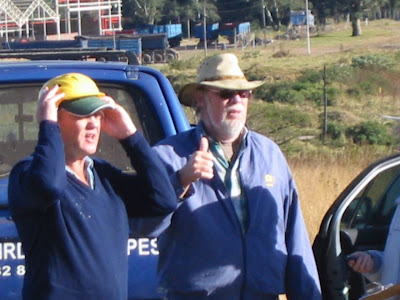 John Dorse with Tim Potter - Tim giving it all the thumbs up. 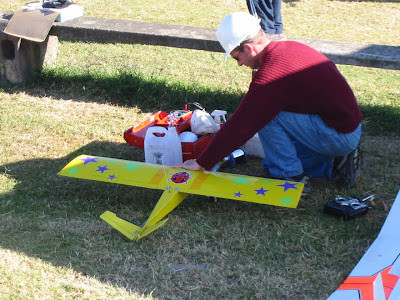 Kevin firing up his Quickie for a race. 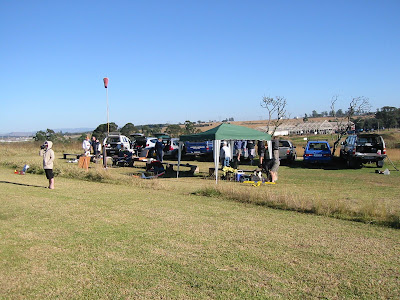 The scenic DMAC Gromor field is the ideal setting for Witblitz pylon racing. 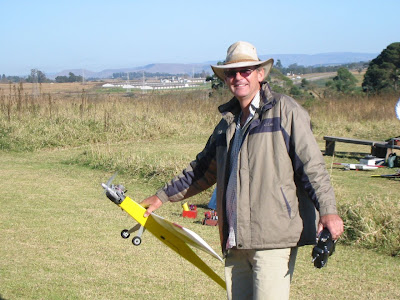 DMAC Chairman, Clive Gager with his Quickie - has a Witblitz in the box and has threatened to take us on at a future date. No good in the box Clive - and rev up yer mate Rob Roe, as well! 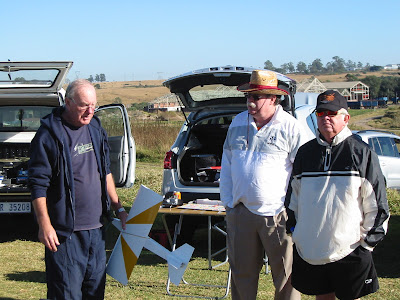 Pete Sherliker with one of his all balsa Witblitz planes, chatting to Dave and Sheldon. The Jury out on whether these and John Dorse's Moldie version had any advantage over the stock foamy versions as the two pylon legends just flew so much better than the rest of us.......

Wow, what can I say. One of the most enjoyable day's flying I have had in a long time. Apart from being so stupid as not to measure a Course to practice on, not having enough proper batteries, crashing another Roulette, I had a ball. I was very lucky as apart from dislodging the wing hold down bolt fixing and a broken prop, everything else is fine, It lives to crash another day, another time! Having said that the Velocity race certainly made up for that mishap.

A big and hearty thank you to Gail and John Dorse for putting this day together, their tireless effort in driving Pylon in this province has to be admired. A big thank you to my glider mates for the enthusiasm in backing this event, the loan of batteries, and the prop from John. The flying was great fun, the fact that there were no midair's escapes me using a two pylon course, shows you how wide we were actually flying. I must admit to being a bit jealous of the power boys but the Witblitz will have to do at the moment.

As John indicated, a venue needs to be found and maybe Dave and Mark's Umdloti site is the best available at the moment, early start before the wind gets up. I will make an effort to contact the principal of the Crawford La Lucia and see if we could get access to the fields, but Google earth shows only 130 meters length on the biggest field, and neighbours!
I will keep looking,

The glider guys got their butts kicked but it was addictive as hell!

Thanks to the Highvelders for the good advice and encouragement, also our two local pylon legends John Dorse and Pete Sherliker. John had molded the Witblitz (Ja) and even the hard to get spec prop!

Funny enough though, Sheldon reckoned the race of the day was the three Velocity 2's head to head for a novelty race - such a pity these howlers have gone off the market. 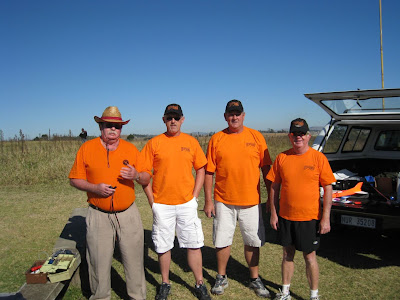 Posted by davedurbs at 10:44 AM No comments: