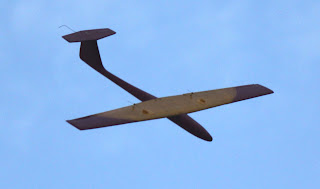 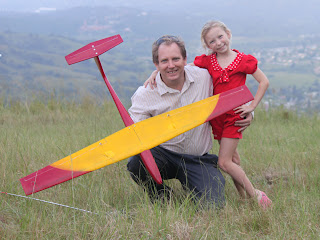 After losing Vanessa V at Inanda some time ago, I've been a bit down in the mouth. To perk me up, Erik gave me a glass fuz he had moulded & a set of very thin wings he'd been experimenting glassing using a vacubag. As I've always wanted a Toko - and this was similar - I was delighted. Working hard - learning about the different uses for cotton flox, microballoons & lite filler, I finally got her ready last night for today's SW blow. Well, she certainly did not disappoint! Stable, Silent & Fast - a lovely plane. I'm really looking forward to getting acquainted.... We have christened her the SPEEDFREAK !
Posted by Bill Williams at 7:16 PM No comments:

Start place and next step for the Sportsman aerobatic guys

Dean was talking Mike Smith through the basic part of the Sportsman’s schedule with his Graphite 2M on Saturday – nice place for the guys to start then the question was posed, what next? Mark Phillips also asked if there is life between Sportsman and Expert.
For those wanting to have a dabble, Toss club league conveniently has a C, B, A grade listing, from which much of the recent event maneuvers were drawn. Start with C and progress to B and you should be well armed for future participation in Sportsman class.
The January event blurb also includes ribbon diagrams for most maneuvers, if you are in any doubt:
http://www.toss.co.za/index.php/aerobatics-league-2/league-grading-manoeuvres-2

Posted by davedurbs at 12:51 PM No comments:

The story from this side is intended to be shortish, suffice to say that the TOSS team yet again improved on an already immaculate event. Some verbage and Russ's pics will be added as and when time permits.


"What my thoughts were about the TOSS 2012 event and the trip as a whole;


It was a mad rush to get Luke and my gliders safely packed into the transport box and rush to King Shaka Airport on Thursday 26th Jan, but we made it and arrived in Cape town to a howling south easterly +/-35kt, we went to the flat and unpacked the planes as fast as possible, just couldn't resist a sundowner flight on the wrong side of signal hill, it was awesome the KGB was out in full force doing vertical rolls for about 100m up and then diving between the trees, the guys at Dave's flat could see the wings glinting in the sunlight, the landings were quite something.
The Friday morning we made our way to some of the local hobby shops and a few other shops, after a late breakfast or an early Lunch we headed for Red Hill, what an awesome place to fly, the view is something I cant begin to explain to you and the wind and lift was even better, "THE LANDING ZONE" what's that, you come round the back in good lift and try position the plane over a nice bush and then flaps away and full down elevator dropping it in the bush and then you go and find it.....LOL
The Cape Guys put on a well organised competition on Saturday morning with nice fresh southerly winds at a new site called Smitswinkel, I didn't see any shops there so don't know why they called it that but another breath taking view and flying straight over the sea, what an experience. Having never flown there we launched straight into the first round, the Luna did me proud as it didn't miss a beat, although you can ask my caller Luke my fingers were a blur on the sticks as the nerves got the better of me but held it together to have a very good first ever round of a comp at a first time ever flown site for me.
The Sunday I think I was quite relieved there was no wind as we were quite wind swept from the previous two days of sloping, so we had a photo session at Komajie and Prize giving at the famous Dixie's in Simons Town.
What an awesome event we need more of those during the year, bring on the September Zigginanda/Switchblade event we need lots of local entries and support, lets start practicing sessions on the slope!!
Regards
Dean"
These pics from courtesy of Mark Phillips: