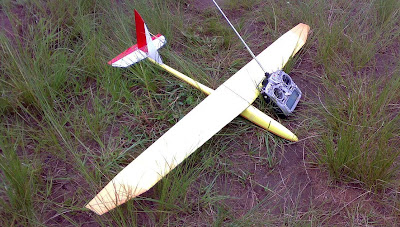 The cross tail Prodij (pardon the glare) after the maiden between the mist and showers at Derek's Dale on the weekend. The fin and rudder unashamedly cribbed from the Middle Phase (always been a Foss fan) but Dion reckoned it was the worst he had ever seen - just no accounting for taste, I guess.... ;-)
What a sweetie to fly (but I guess same for the V) and only two peeps of up trim needed (the substituted more clunky PCM receiver moved the CG from 73mm to 71mm). Tracked so true - these Aeromod planes are stunningly well designed and made. Would never have believed one could shoehorn four micro mini servos, a ten channel receiver, five cell 1100mah pack and 440 gram ballast in to that sleak little fuselage.
Never been impressed with spoileron braking until using these 30% flaperons - plane went from 40 metres to zero so quick on the first landing, there was almost no flare out time.
The elevator was straight "shadow projection" of the V tail to get down to the right size and was viceless.
Light conditions so stayed with 150 grams ballast, dying to see the 440gram sled in business.
The red / white tail combination was chosen for visibility and stuck out like the proverbials. Red will be added to the tips to achieve the same as the murky conditions blended the wing just a tad too much.
Of interest to those slopers who habitually only fast charge planes at the slope, the Nosram five dumpy cell 1100 mah (now coming out in 1600 mah) receiver pack comprises fast charge nimh and is specified to be charged at 1.2 amp. The pack also balanced the plane as above without a single gram of lead added and was siliconed in for security.
Eish, why was this not finished two years ago.....? ;-) Chapter 2 will be Le Coquillaj when a suitable receiver is sorted.
Posted by davedurbs at 11:44 AM 1 comment:

Correct route to Red Hill slope for the TOSS event 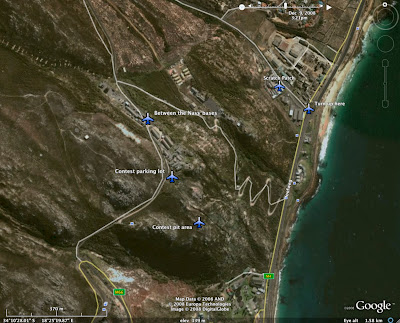 Regrets to Kev on being tardy on loading up these google pics for the correct approach to Red Hill, rather than Dave's long cut 9k approach.... 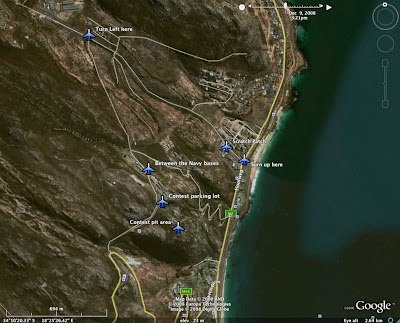 Click on the pics.
Some updated comments from Kev on the forthcoming TOSS slope event:
"what pressure?... this is Cape Town dude.... no pressure.

Really looking forward to having you guys in town.

But seriously, all is organised, to Navy tents on the slope that will be put up and taken down by the navy's maritime reaction squadron, speakers, pa systems, food, drinks, all the goodies.
Got a lot of help from a lot of people and the TOSS guys have really come to the party with donations of trophies etc... as well as the stuff you guys are bringing down, so were all kinda primed and ready to go.
....as mentioned before, we may well have to do a certain day as a roving event based on the wind, and are keeping Signal Hill, Kommetjie and Cape Point as possible other venues should the wind jab us in the arse...

we will just have to fly as the wind dictates... albeit minus the tents and all the lekker goodies, but we will still be able to get some scores going.... so you may not have toooo much time in the pub!
Posted by davedurbs at 2:37 PM No comments: