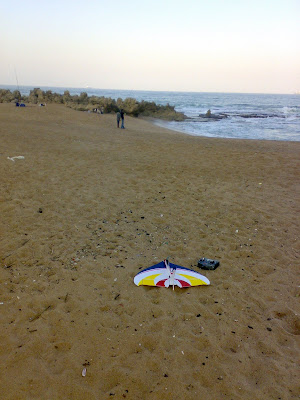 I had been intrigued by the pre-promo of the excellent SABC TV2 "Shoreline" weekly series but only actually caught up with the series after it had already ventured down the west coast and was (fortunately) at the TOSS Red Hill venue at Simonstown - which gave that venue an added interest after our slope event back in January.

Been following it up the east coast, in awe at some of the lesser known stunning slope soaring possible spots, but equally engrossed in all aspects of this absorbing local series. There is just so much we do not know about our homeland.....

Kudus to SABC for a magic production, wow. Try catch the last episode or so, if you can, Monday evenings.

My first experiences with the Parkshark had been diluted with the iffy power of two cells and an ever present coastal breeze. Saturday and Monday yielded un-commonly eerie still conditions and the Park Shark proved an absolute delight with three cell power. Even swerved off at sundown for a quick fly then also could not resist another floodlight flight after Shoreline last night.

Really impressed with parkie plank concept but less so with foam so next step is a slightly stretched one of these little Frazzle beasties:

Posted by davedurbs at 1:15 PM No comments: