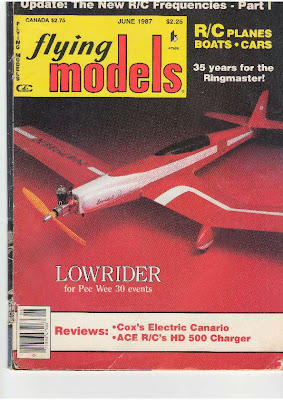 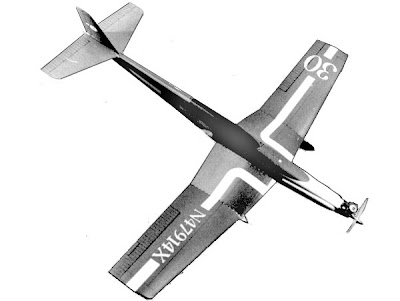 My appreciation goes to ex Durbanite Vic Schroeder, the Jart man, for doggedly tracking down this long sought little beastie for me, more power to chat groups and blogs. This really made my morning! 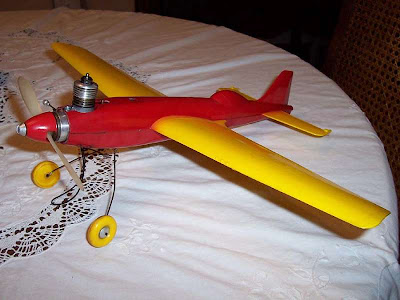 Back in the early eighties as a struggling audit clerk, I picked up an American magazine in the CNA, which yours truly could not afford to buy at the time. The model plan was a small 30 inch 020 powered craft that had apparently been scaled down from a larger model. Drooled over the stunning little red plane till closing time then tried remember the issue number etc as I was determined to blow up this sleek little model for other use but, alas now decades later trolling through Google and plans list has not brought forward an old listed plan or even a model or full size version that even approximates that natty little plane. 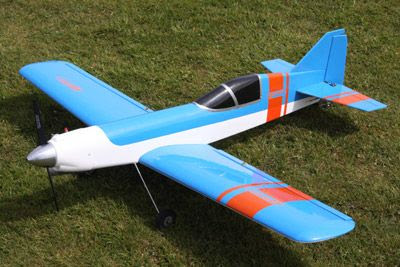 Thus I am hoping to describe the model using parts of other familiar craft. The features are a composite of:
1. The red and white Corsair colour scheme with the same bent wing (what is the opposite of gull wing?) but even more pronounced wing bend, almost Stuka like, with the shrouded wheels exiting the wing bend somewhat like the less pronounced bent wing (also red and white) of the Comet. 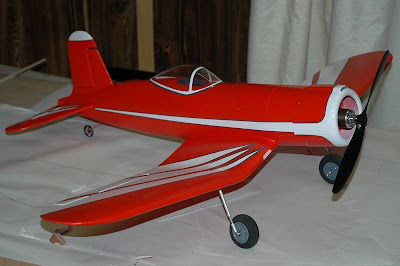 2. The cockpit was sleekly set way to the rear ala a very slim version of the pale blue Magician in the middle pic.

3. The very slim fuselage not unlike the little red and yellow craft in but obviously rather coupled with the afore-mentioned Corsair / Stuka bent wing and a canopy top straight lining to the rear like the Magician.
Not having a shred of artistic ability has frustrated this image stuck in the mind and I would be verrrrrrry relieved if some kind soul with a long memory could point me in the right direction to find something on this elusive little gem.
Posted by davedurbs at 4:17 PM

Which magazine was it, can you remember? I know that the complete Model Builder is available on cd. Plus I've got the scaled down plans in the Illustrated Plans Guide for RCM, if you can remeber anything about it, even if it is just a stab at the date, eg 1980 - 1982 it would narrow it down.

Which magazine was it, can you remember? I know that the complete Model Builder is available on cd. Plus I've got the scaled down plans in the Illustrated Plans Guide for RCM, if you can remember anything about it, even if it is just a stab at the date, eg 1980 - 1982 it would narrow it down.

Dave,
I have looked through my RCM plans guide and I can't find it. It may be in Supplement 4 which I don't have (July 1986 to March 1989) but if that's beyond the date you remember then it is not in RCM by my reckoning.

Thanks for your good efforts. I must confess I am terribly vague on the year - could well have been 86 to 89. magic work on the Jart stuff!

Vic
Thx, the Jart needs a trip to Winston Park!

Vic, you Mamba, I am eternally grateful to you and will certainly offer you a pint or three when you make it up to Winston at some stage!

I will certainly give you a shout when I re-visit Durbs!

Okay, so what is it called, wingspan etc.Do tell!

Lovely looking plane, no wonder Dave was hankering after it!