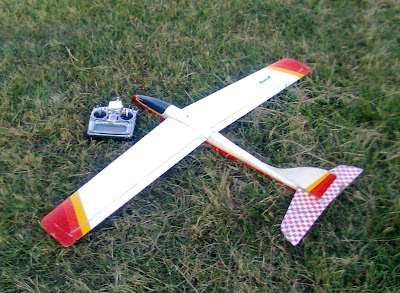 Back in the early eighties, a design appeared for the Supermite glider, penned by John E Foster who dreamed up a whole range of solid balsa wing soarers. Two local foam veneer wing versions were flown by Springfield's Lynn Bowen and Heinie then Dave Hooker was moved to build his own glassed foam veneer wing version using a Ritz instead of original plan section. Dave christened his Dyna-mite.
The heavy bullet proof wing on a plain balsa fuselage was a tricky beast for Dave who hangered it but yours truly could see the potential for little rocket on the bigger cliff slopes and lusted after this little beastie for pretty much two decades. Dave parted with it to me in a weak moment just before Toss 2009. Took some cleaning up and the intention was to really spruce it up once I "proved" it was still a go'er for heavy wind conditions. The day I first tested Prodij I managed to get Dynamite slammed in the car door and put it aside, completely losing that little sub plot in the process.
We have grown so used to bemoaning the local slope weather that it escaped us that the local winds have been stonking since we returned from Toss 2010. I suspect February may be the month of choice for good weather and better winds, if one is plotting an annual Pete event? (hint, Russ ;-)
Caught myself yesterday afternoon muttering about too much wind to test the new Wipeout parkie foamie and realising an awesome local slope season is slipping us by....... The penny dropped with a clang and rushed home after work to pour half a bottle of Mark Phillip's super glue in to the Dynamite and abuse charge a battery pack.
Arrived at 6:00pm to Springfield and actually ran from the car to launch, in case nerve failed me. Straight in to a flock of upwards of forty to fifty predator birds (is this not extremely rare?) with the realisation that Springfield would be heat thermal (thus also downdraft affected) by implication but Dynamite simply punched through the holes in the sky, somewhat like the Karos that Russ and I used to enjoy so much. I stayed up way longer than intended (despite battery concerns), pursued by the horde of birds, because it is rare to experience these truely awesome conditions at Springfield.
The large tailplane made for Toksix type round loops and the rolls pretty damn good, as well.
Such was the buzz when I landed at 6:40pm that I immediately zapped off the sms pic and overly excited message to the locals, drawing on some memorable Mike Myers quotes to emphasise the enthusiasm..... This threw Kobus who sent back a quizzical sms, so the aforesaid is the explanation, Kobus, sorry Meneer..... ;-)
Posted by davedurbs at 8:51 AM